Going to Gatebil for the last few years has always created a bit of pressure on me (and I enjoy a bit of pressure, otherwise I loose track of what I’m doing). This year I had absolutely no mission or plan to shoot anything, so I was “free” the whole weekend so to speak. What that resulted in was a lot of running around (and at the time feeling nothing got done). 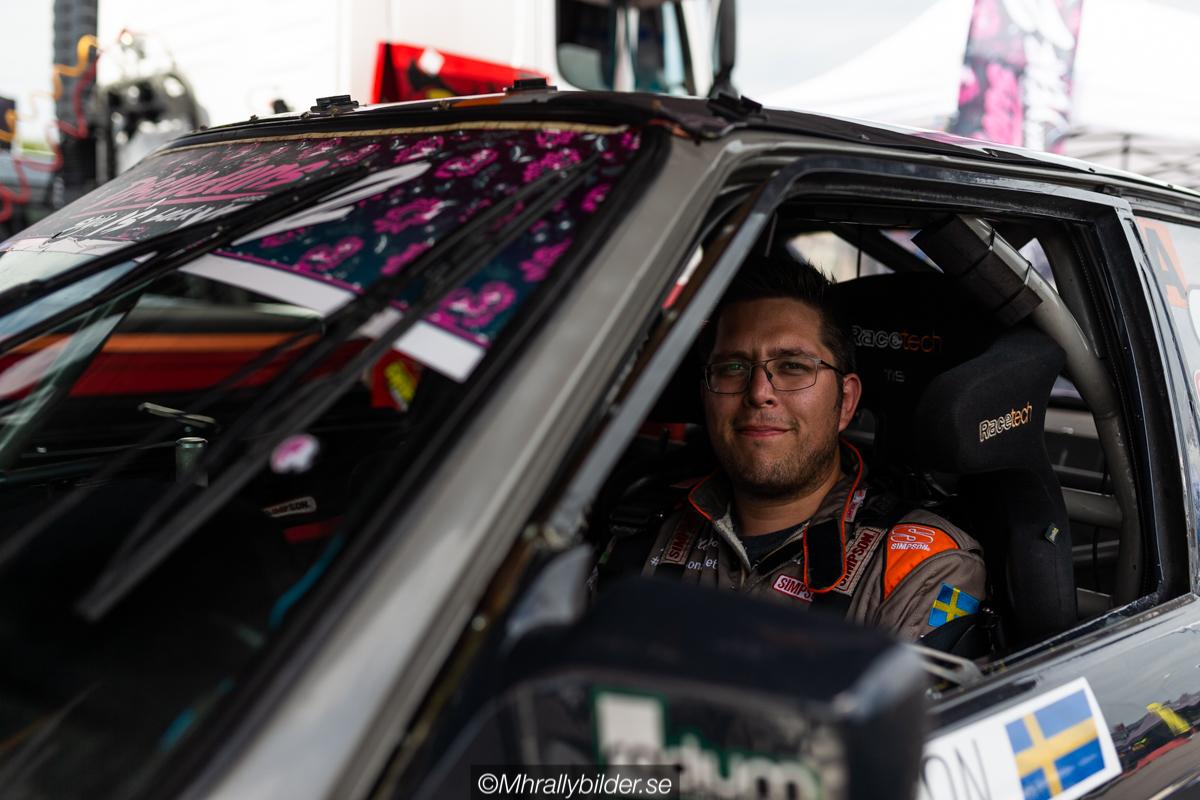 One thing I had in mind was something I will get back to later, but it involved this man, and his plan for this event suited my idea perfectly, but as I said, more on that later. 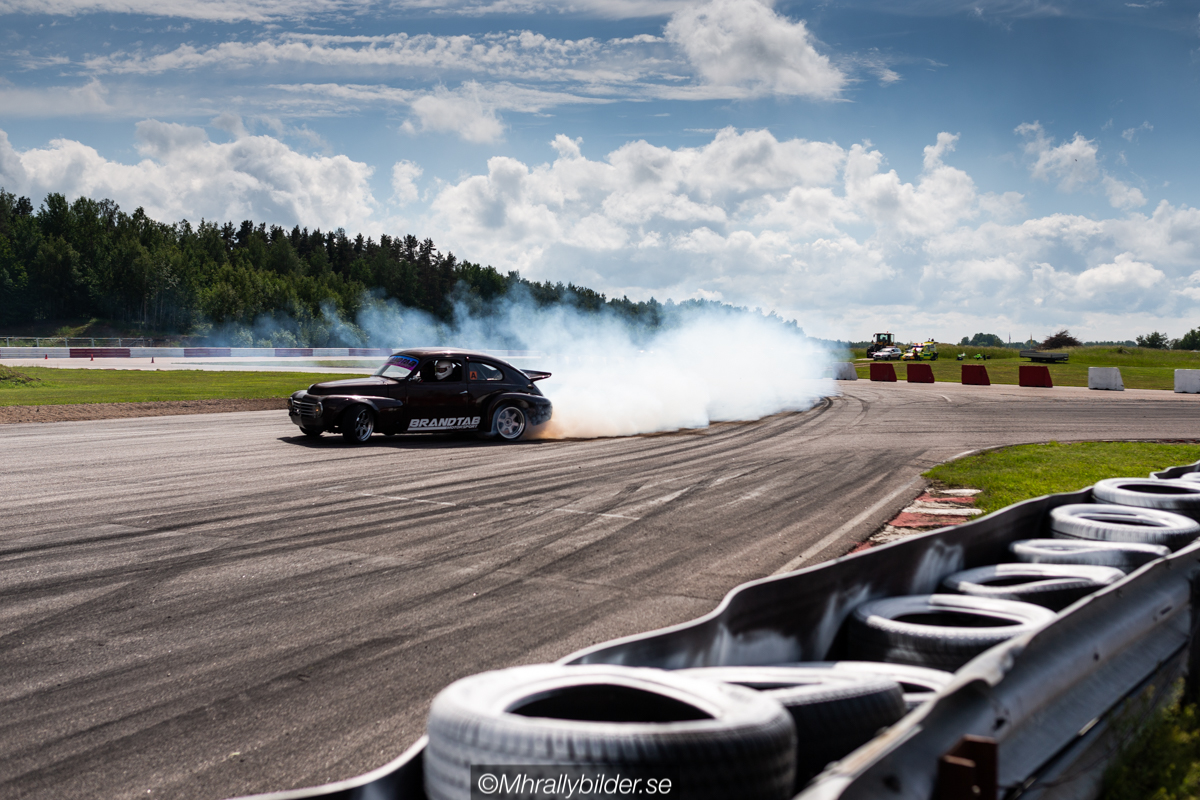 I made my way to the track, and when I got to the track I saw that they ran the “STCC-configuration”, which means that they run only about half the length of the long straight

and then turn back onto the pit straight. The first car I saw out on track was this Volvo PV, and I’m pretty sure it’s owner had replaced the B18 it had from factory! 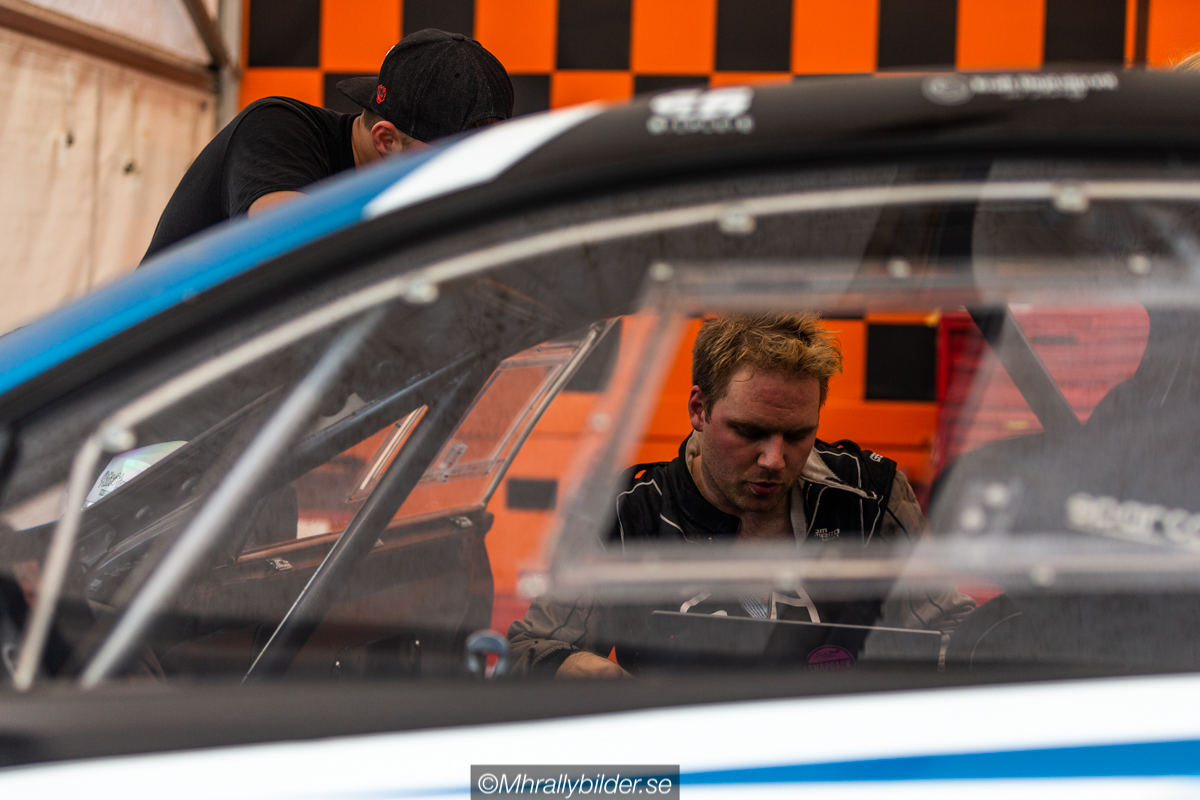 Once I got back into the pits I thought I’d walk by Joachim Waagaard to see how things were going for him, but as soon as I got the I saw the car on stands, frustrated faces

on all of the team members and the bonnet open with some parts taken away, so I just let them work on the car in what peace you can find in the pits at an event. 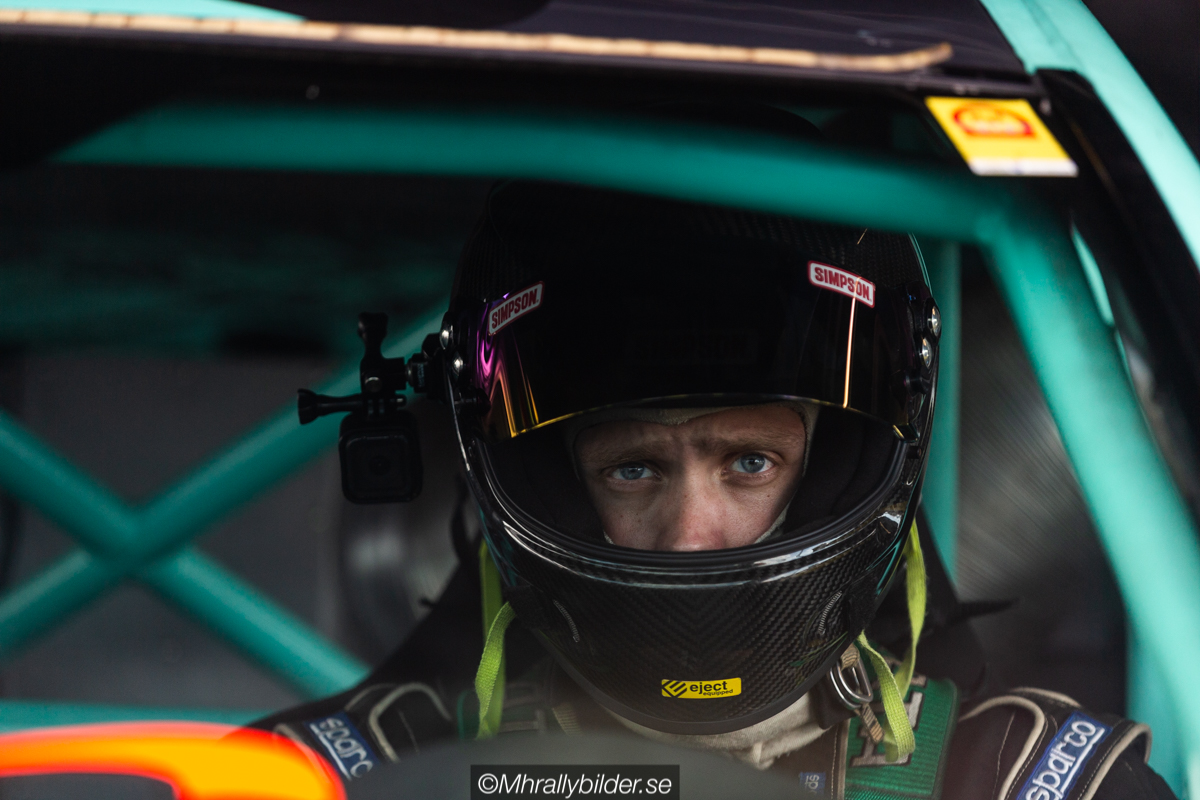 As I continued walking around in the pits I saw Team Lovetap lowering their Mercedes to the ground, and I couldn’t just walk past without grabbing a photo of Mårten

being as ready as ever! 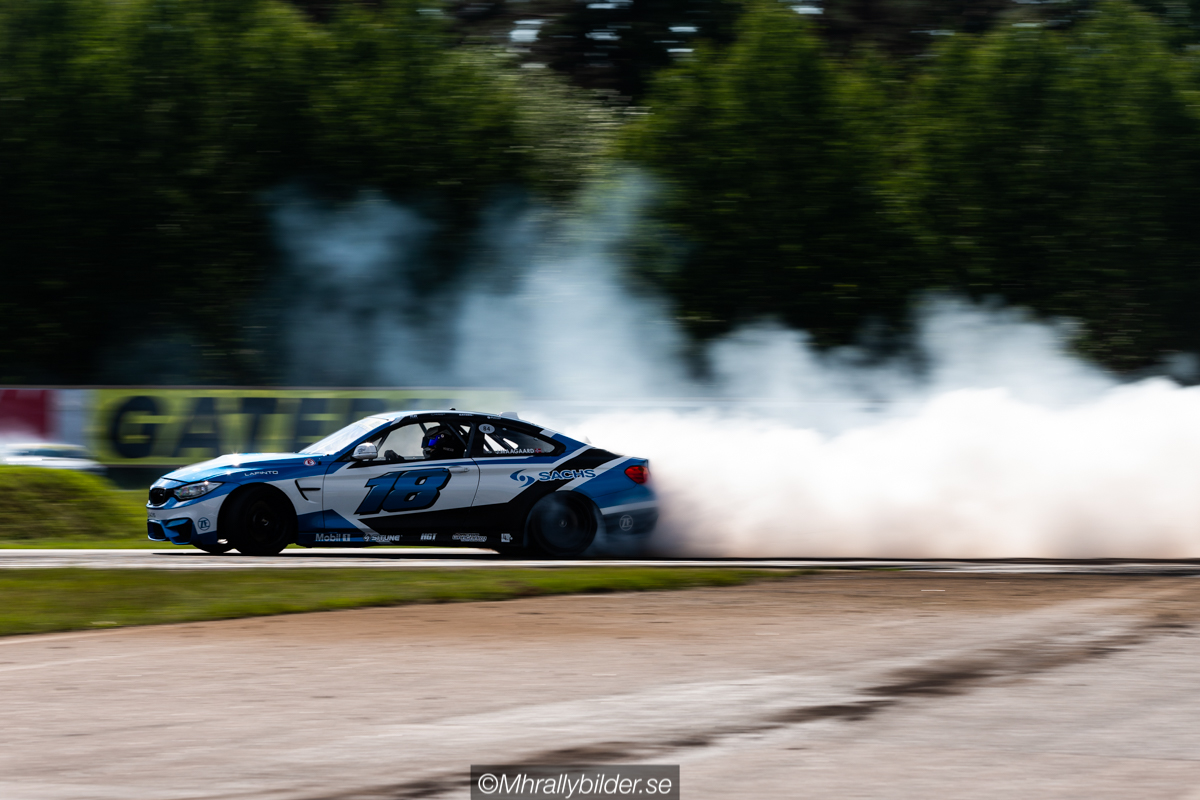 I made my way back trackside and there I heard the glorious sound of a Mast Motorsport V8, and I was greeted with the sight of Joachim Waagaard being out on track in his M4! 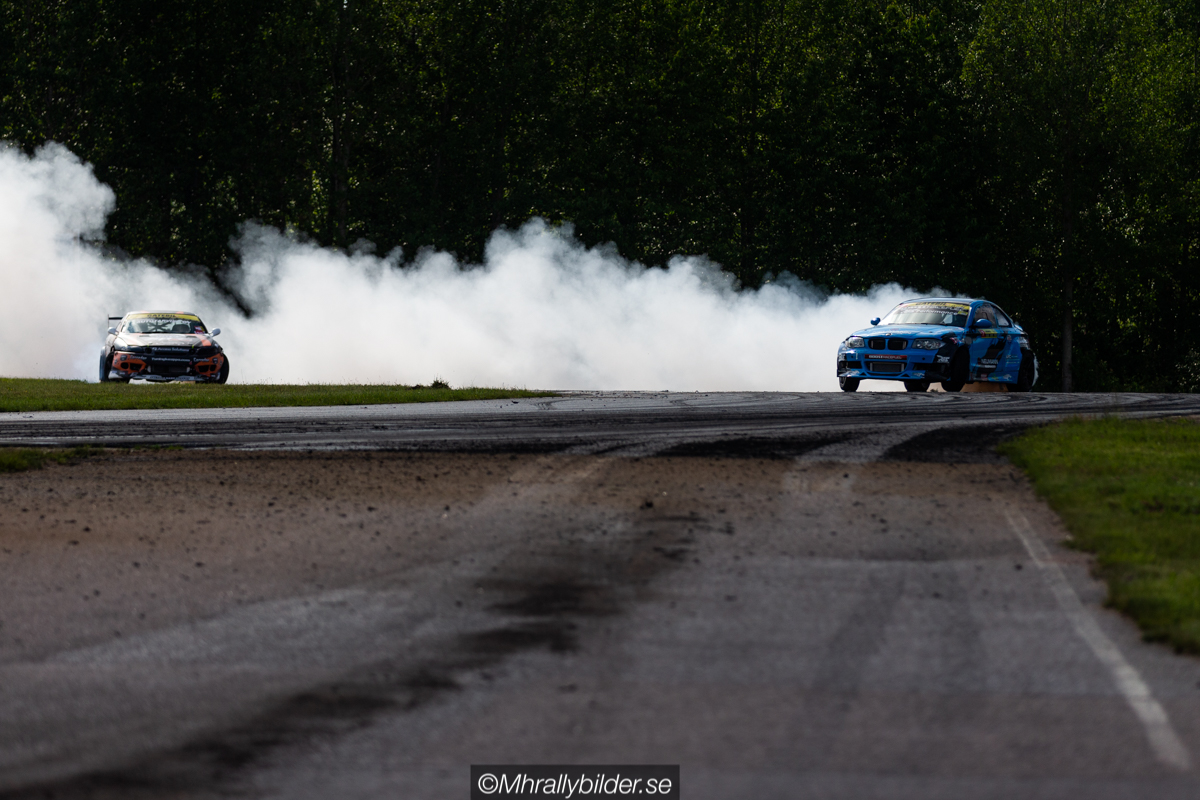 Seeing an old Toyota and a BMW 1M go head to head out on track is something you don’t see every day! 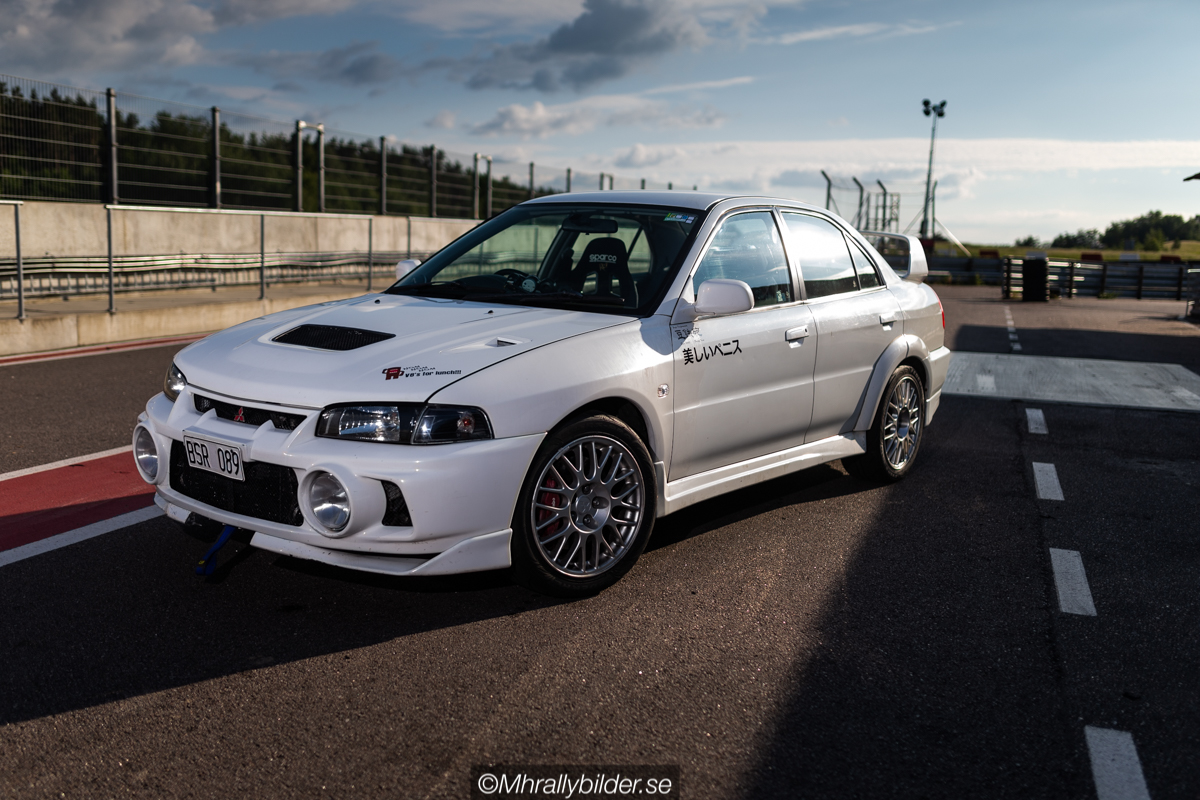 As the track closed the opportunity arises to do some planned shoots with the cars in the pit line or out on track, to make it easier for the owner of the car we agreed to use

the pit line. For being a track car he has kept it in very good condition! 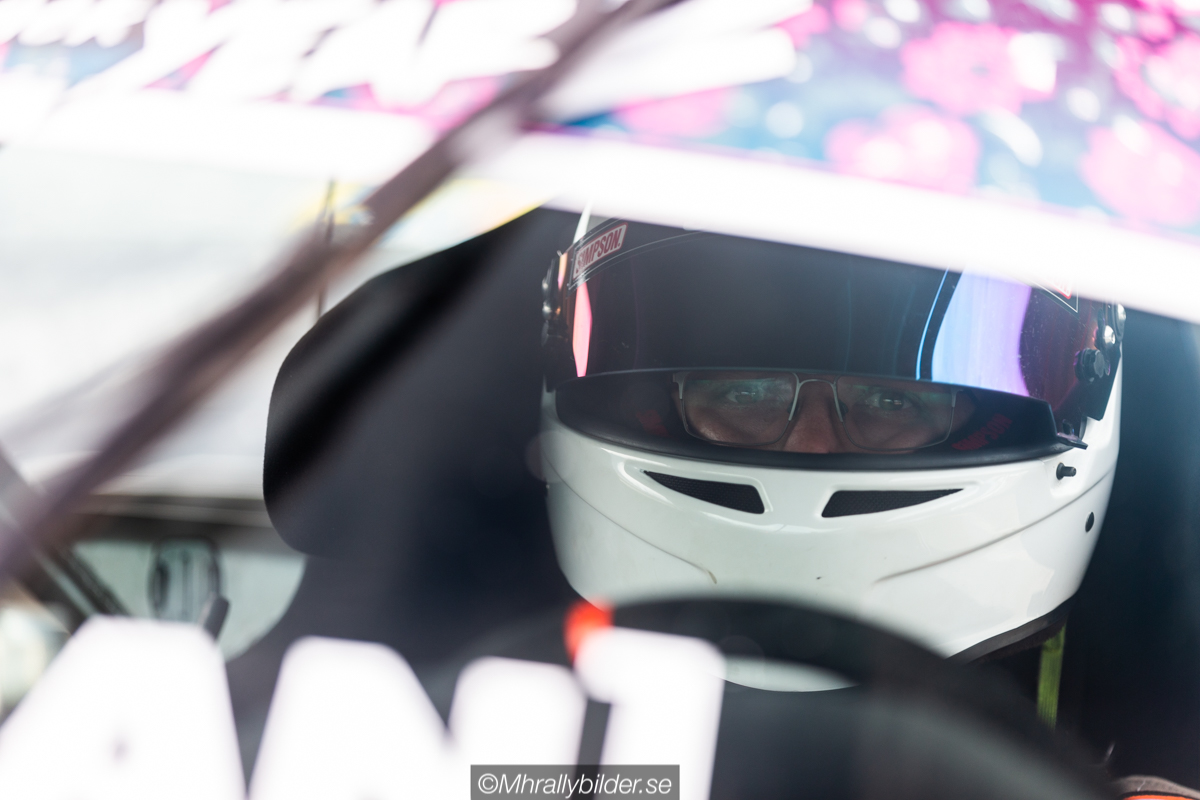 Come Friday morning and it was time to go out on track again, what I hadn’t planned was to shoot anything particular, but Jim Olofsson dropped me a text and asked if I had

any plans on what to shoot that day, and I hadn’t. So we made a quick agreement that I should take some photos of him! 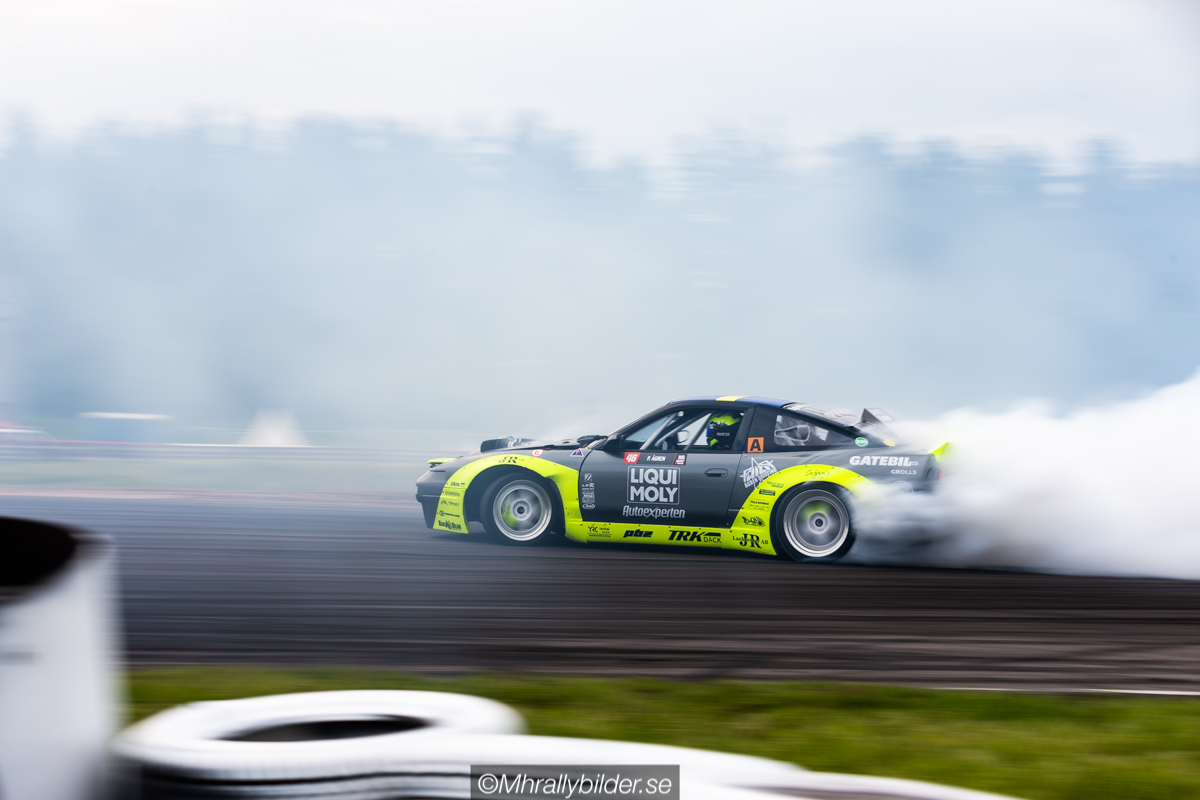 I don’t know what engine was in this or what the driver had for breakfast, but damn it sounded awesome and it was driven in a very appropriate manner (foot pinned to the floor!). 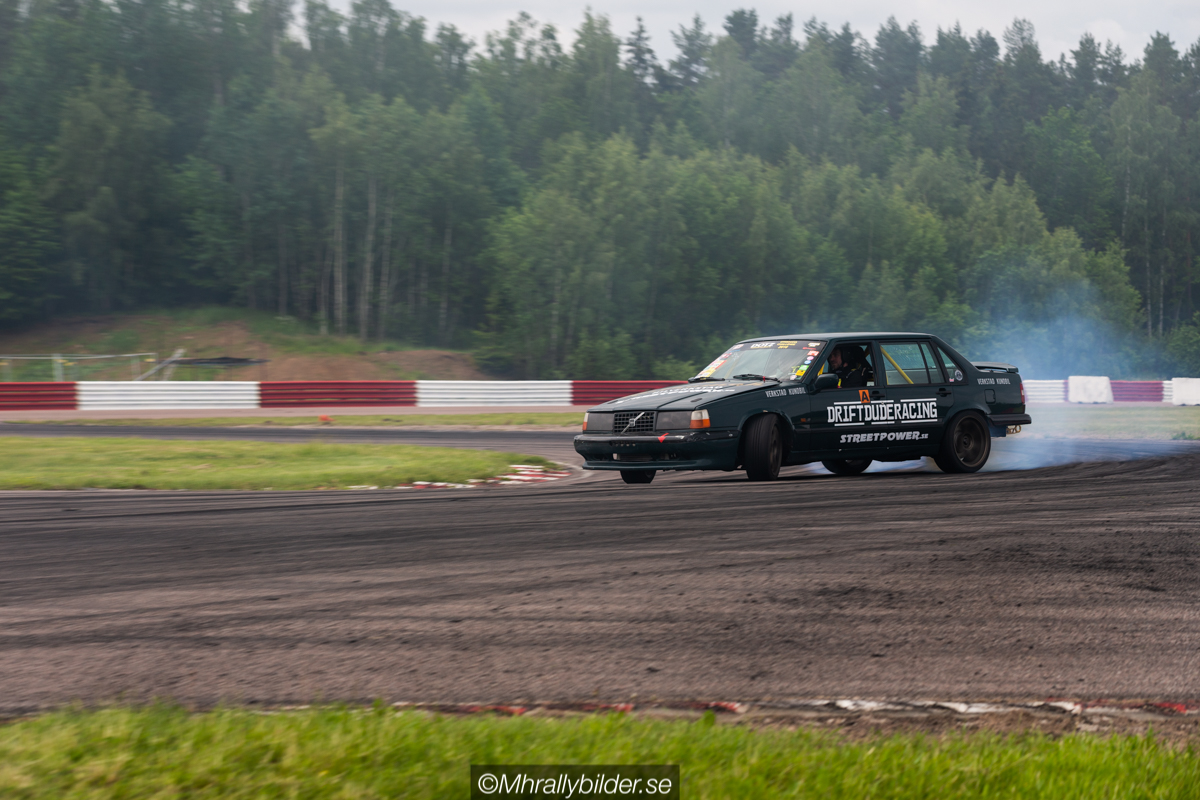 One of the people I went there with drives this Swedish tank! Thanks to a Bavarian power plant it produces north of 900bhp! 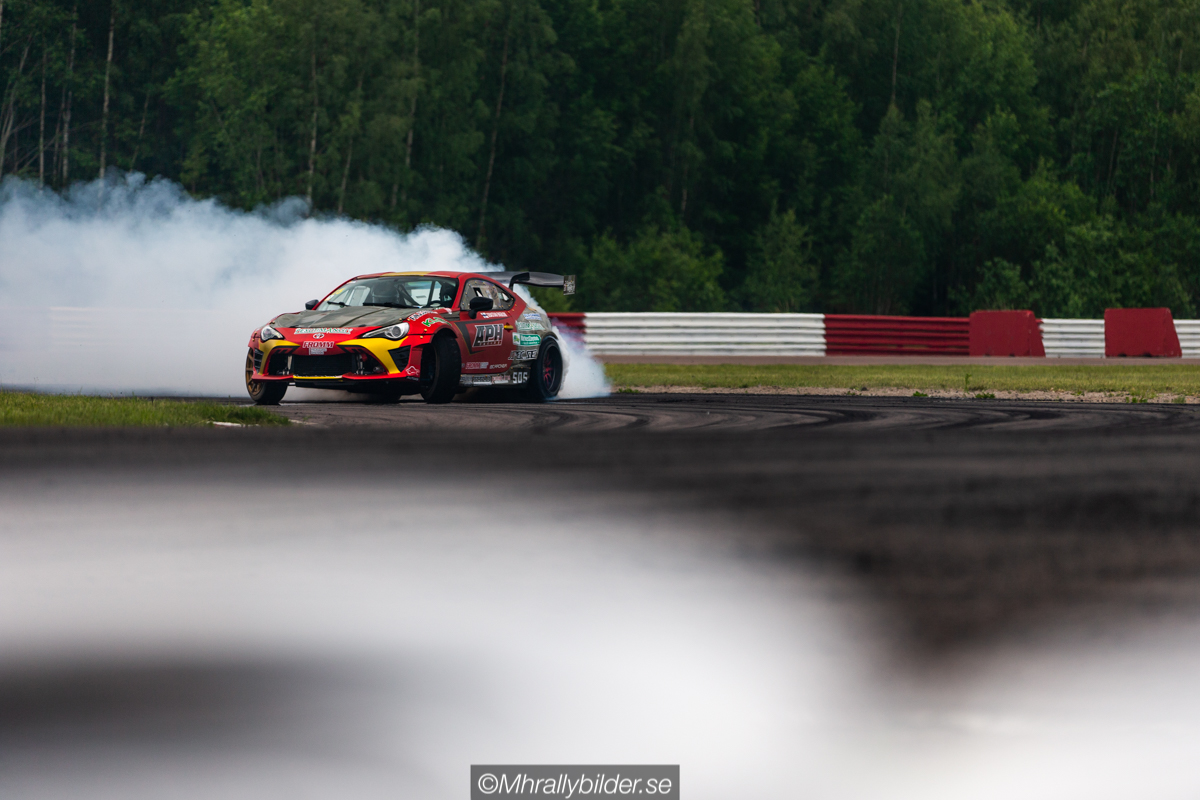 Just based on pure looks this is definitely in the top 3 of GT86/FR-S/BRZ drift cars that I have seen (to this date when this is written 20th of June 2019). 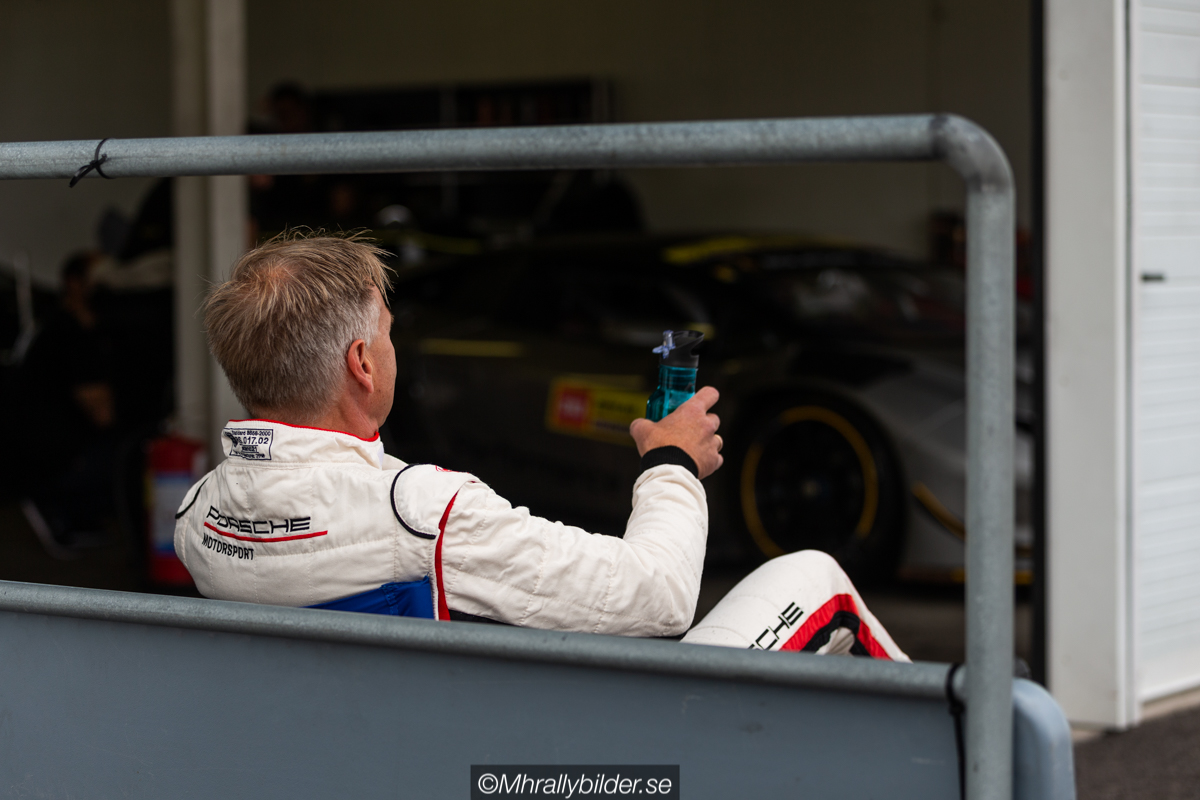 A Porsche suit and looking at a Lamborghini, are we still at Gatebil? 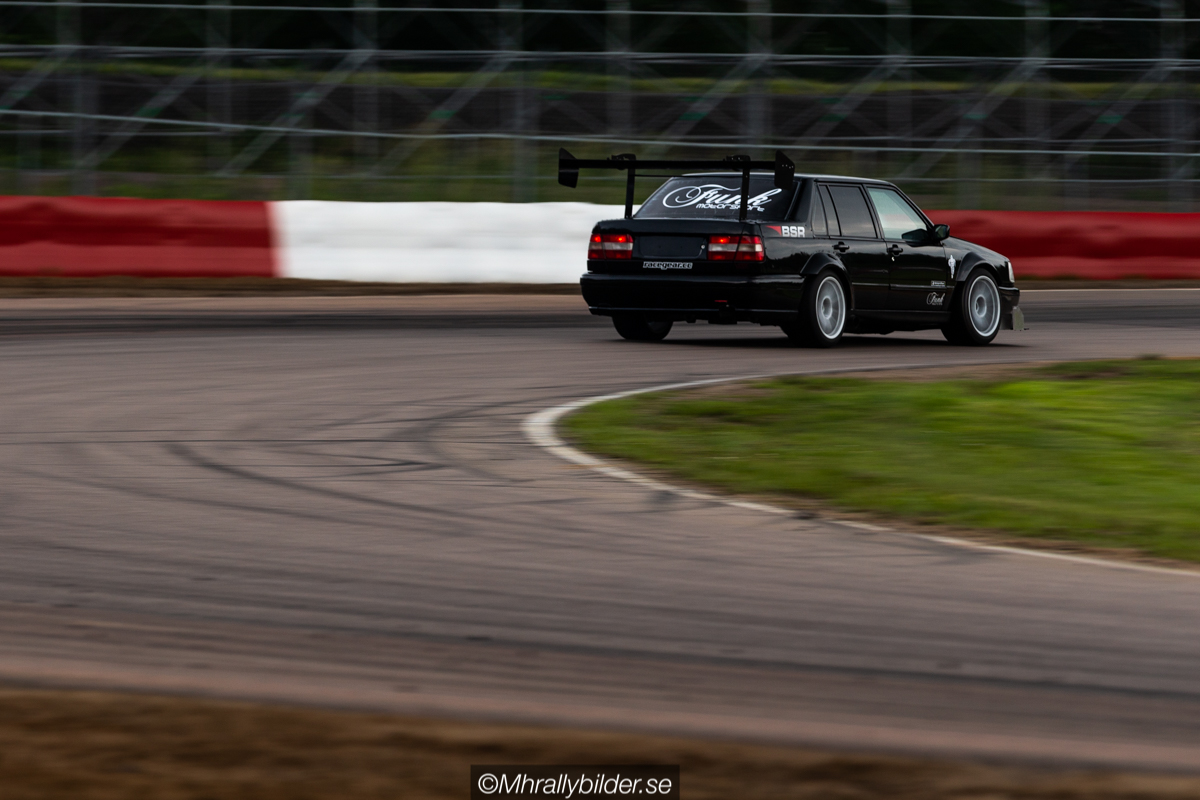 Another of the people I went to Gatebil with was the driver of this contraption, a Volvo 940 with a 2JZ producing above 1000bhp if needed, and according to him still 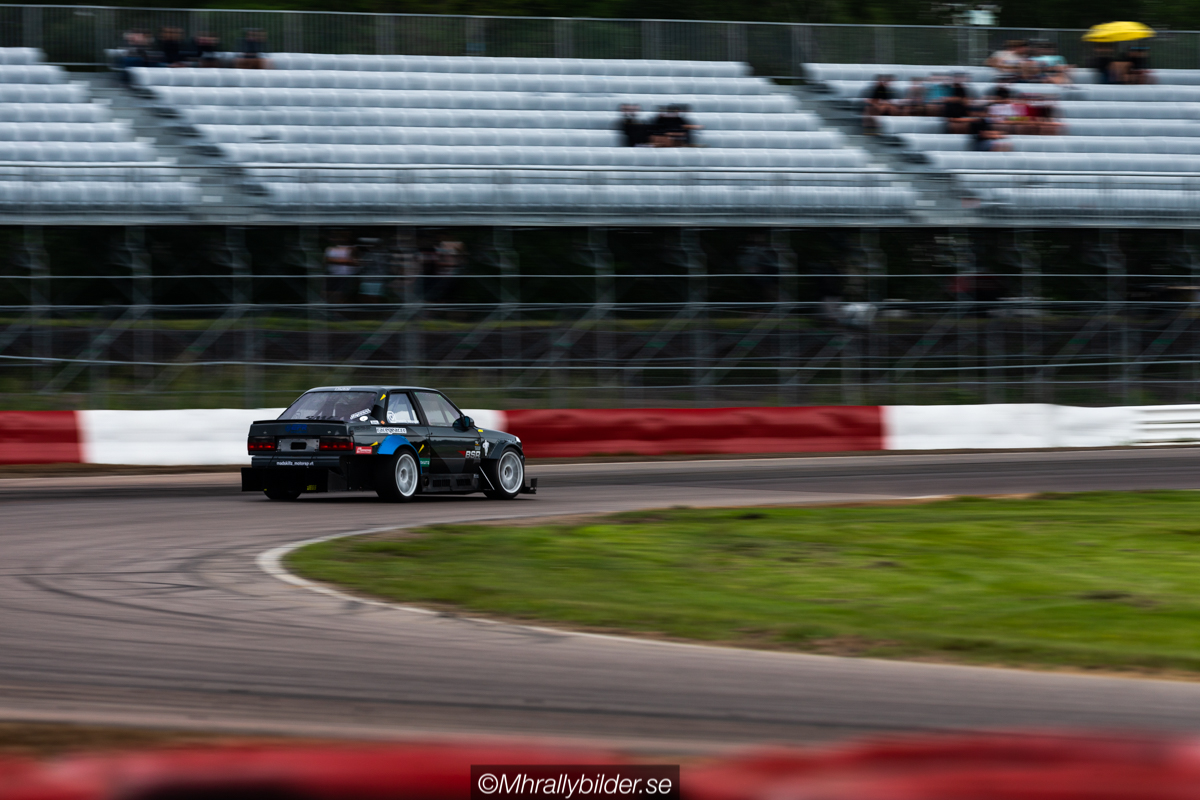 This car belongs to  the third person I went to Gatebil with, and even though it got a bit hot for him during the weekend I’m still super happy that he got some laps in the

car again! He needed that after all the struggle he has gone through this year! 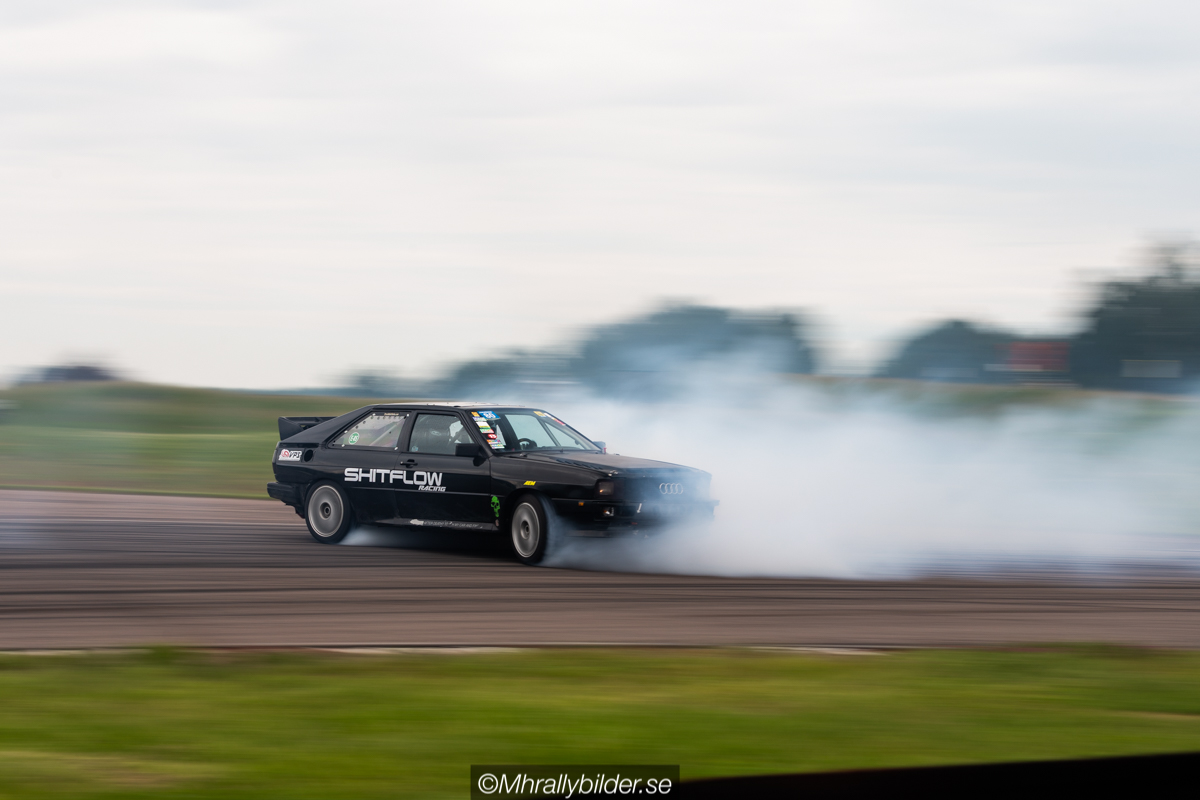 If you tell the drivers where you are planning to stand, you can expect them to drive in a spectacular manner just to get pictures taken of them, this is proof that it works! 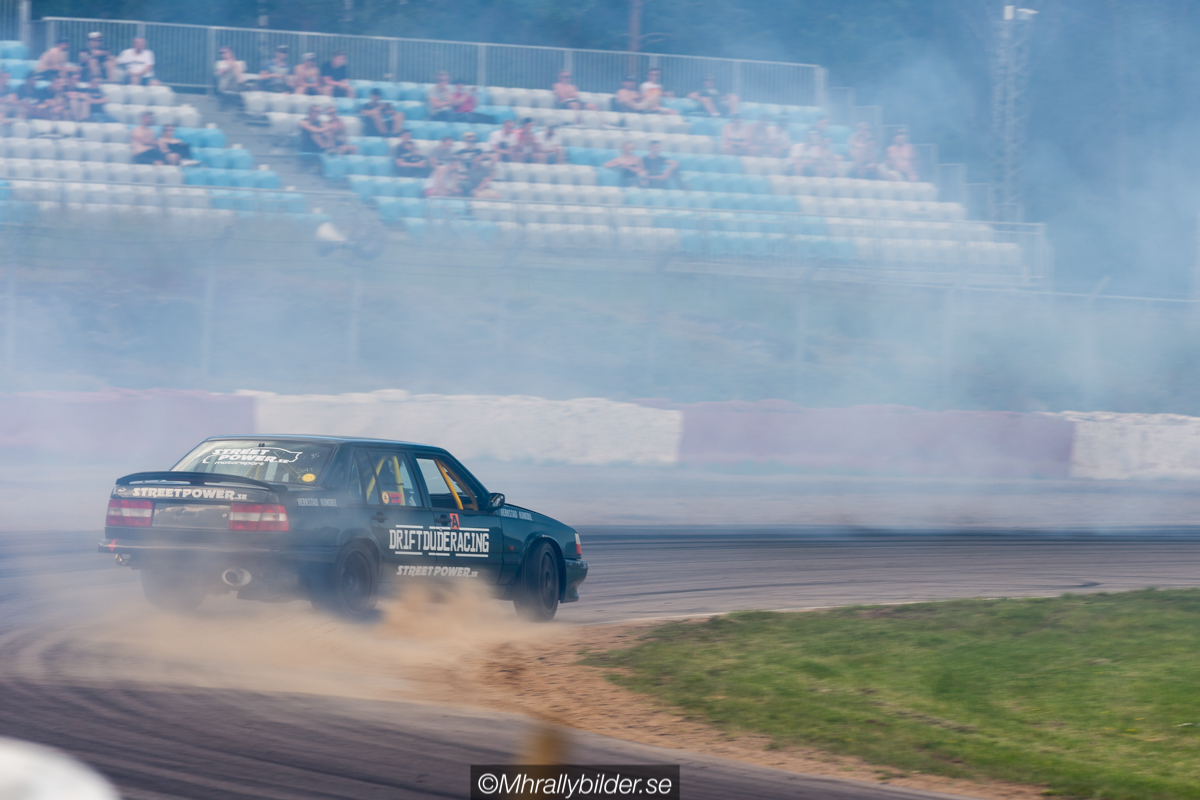 I guess taking the rally cross line can be done without risking the spine coming through your neck when you drive a Volvo! 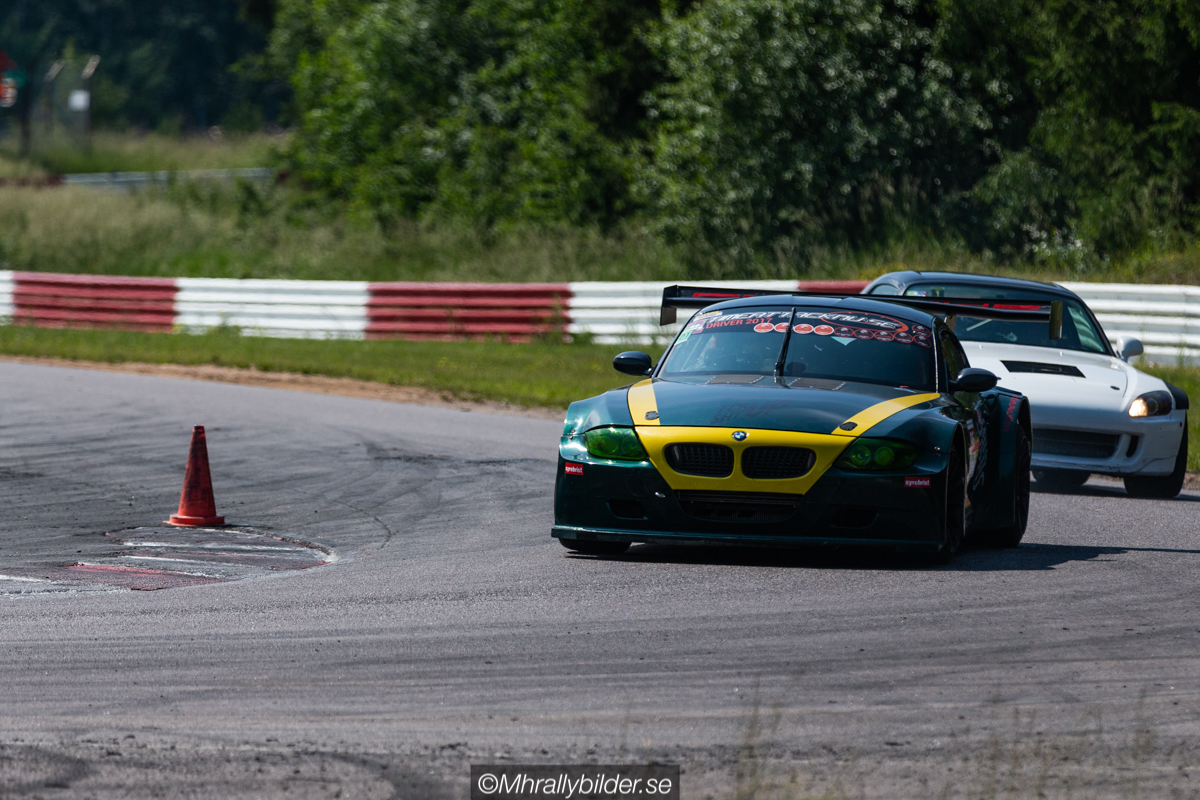 This is a bit interesting, because just a few years ago this car was powered by a RB26 (yes you read that correctly). But the owner sold that (he said it was too easy to run a

RB26 at 700bhp in a Time Attack car) so he gave himself  new challenge when he took the engine from a Porsche Cayenne, mounted twin turbos on that and somehow

squeezed it in underneath the bonnet of this Z4, but sadly he never got that to work properly. As it is now  it has the engine and gearbox from a BMW 1M (so for him it’s

almost stock), but it didn’t work out too well with the new DCT gearbox, but I think that as soon as it’s fixed it will be a weapon on track! 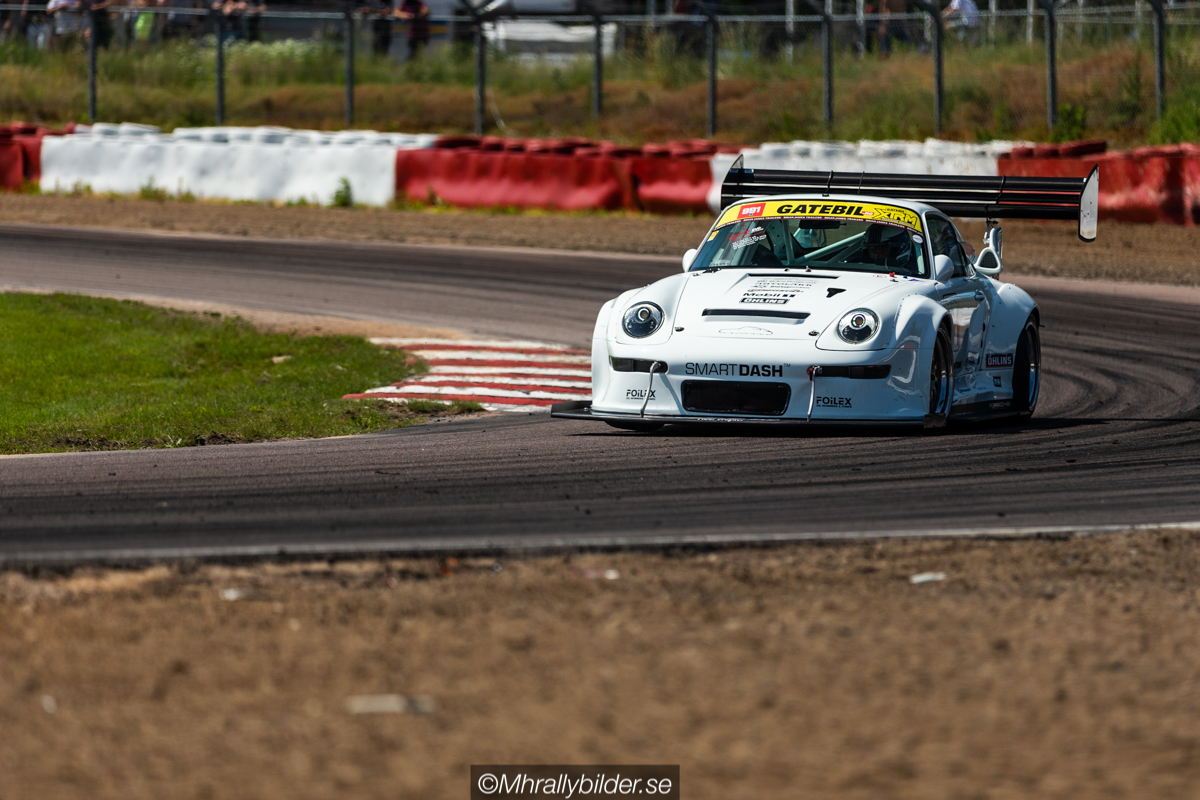 A Porsche 993 GT2 at Gatebil? Someone please pinch me in the arm! 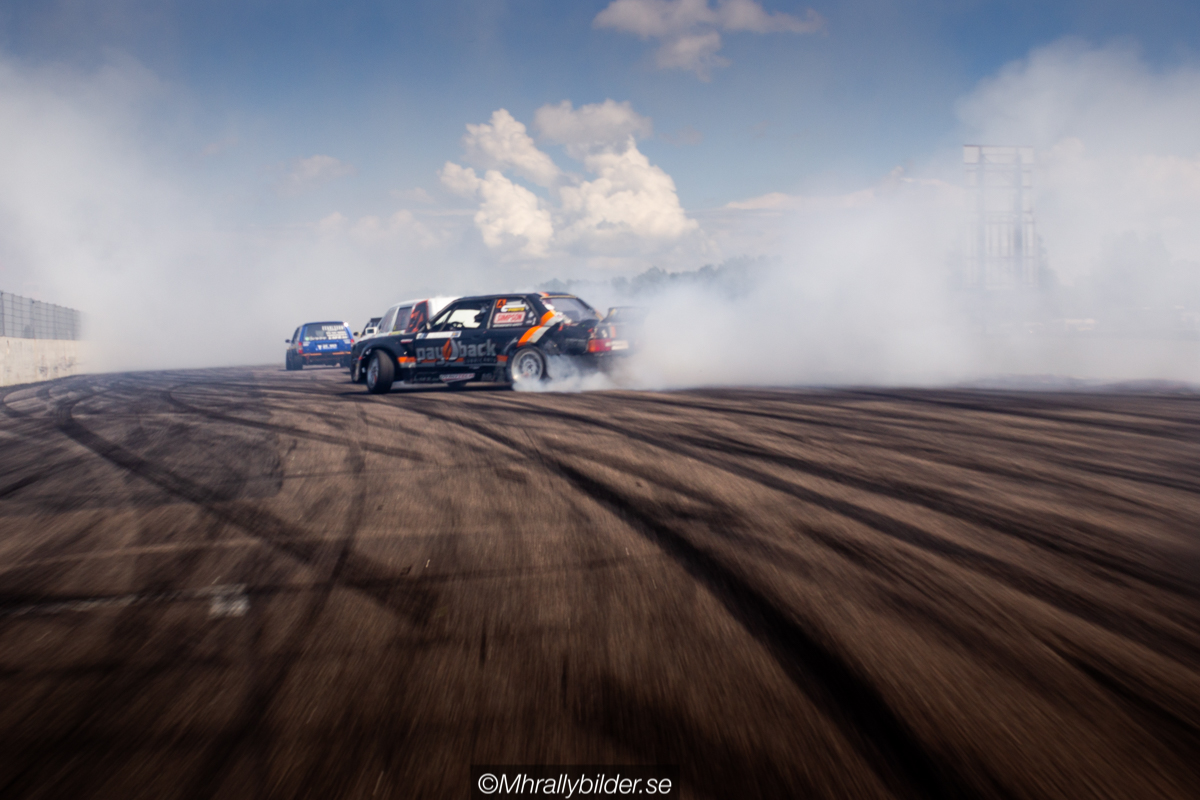 that, and he called a friend of his (the owner of the white Evo in the 8th photo), so when all of us were together we started planning out on how to create something new.

The photo above is what we came up with, and I got my first ever ride on track as a bonus! 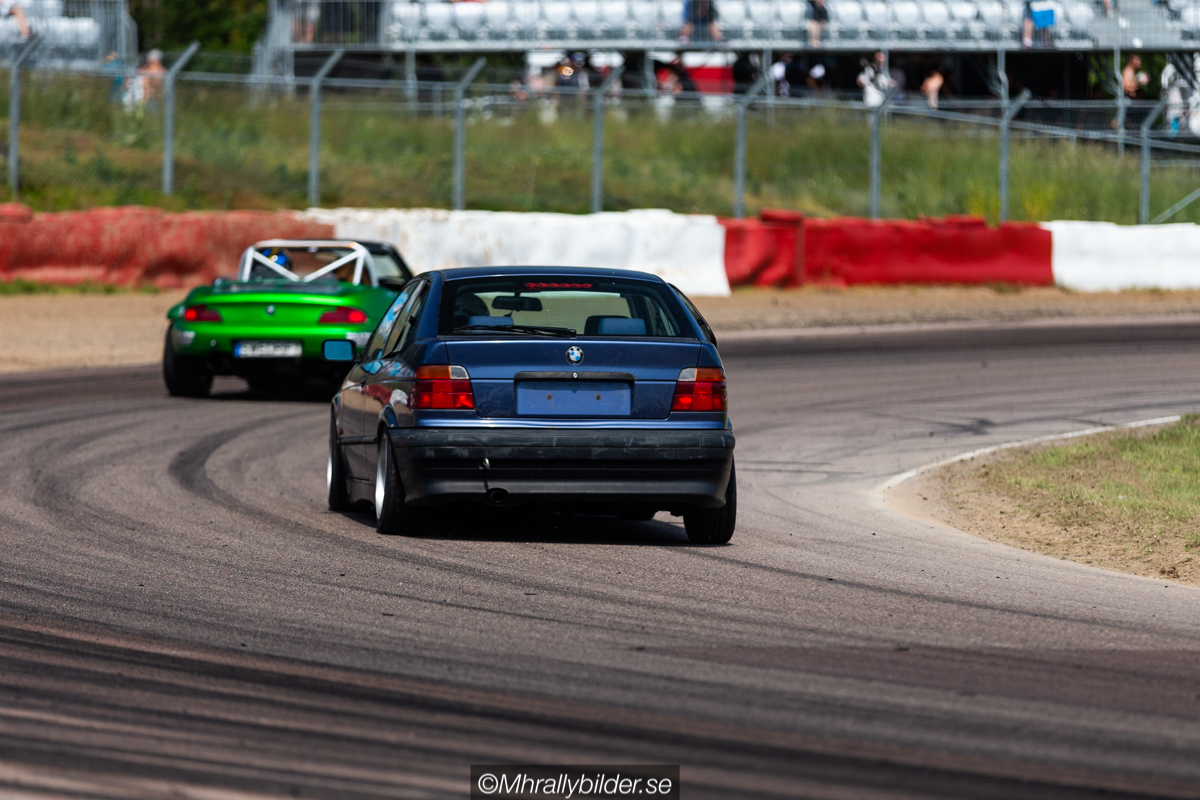 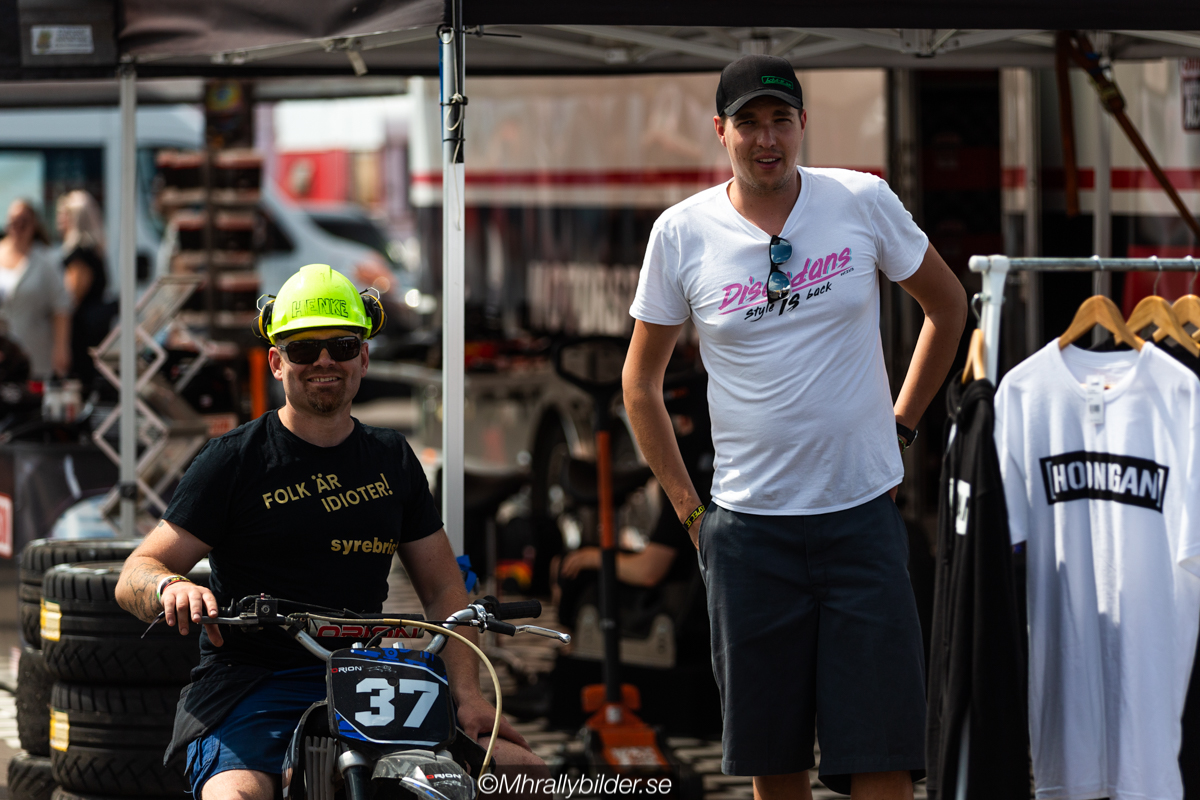 With “people are idiots” written on your black t-shirt I think you are the bigger idiot, since it was close to 30°C at times during Gatebil, but who am I to judge! 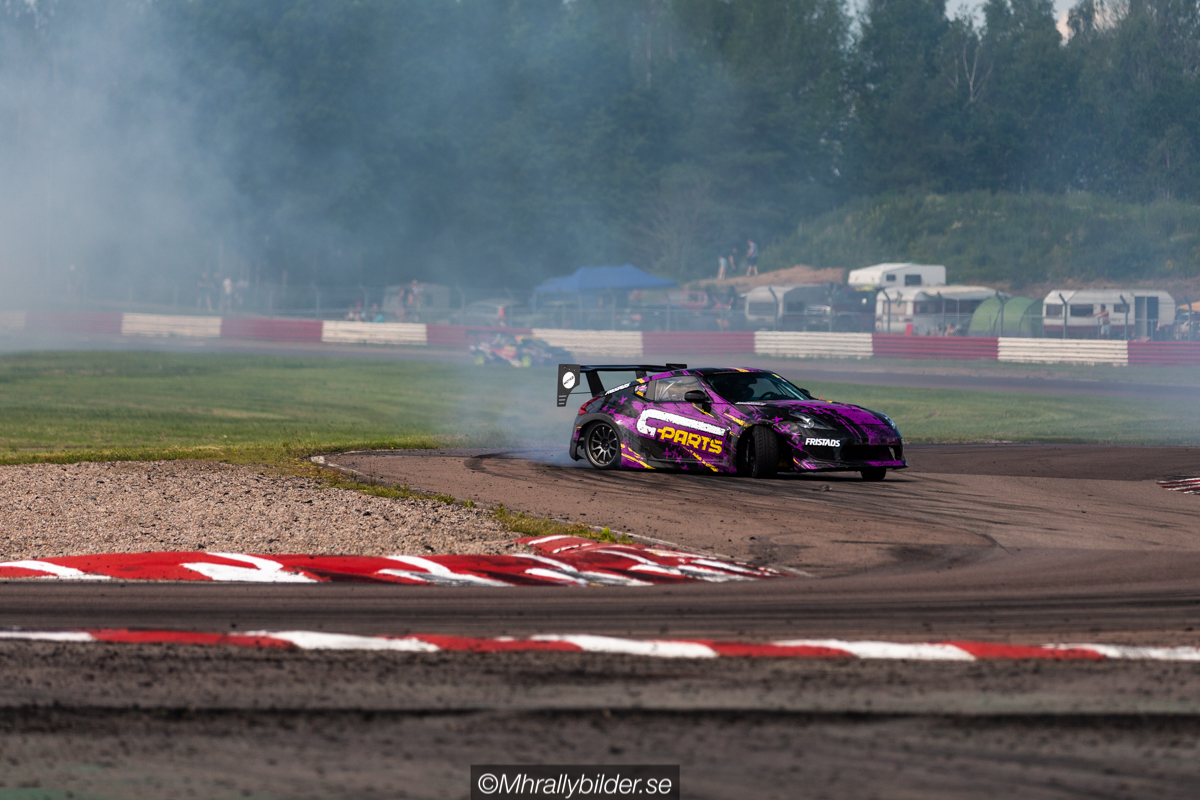 Why does purple and yellow go so well together? and why on earth doesn’t more people put a 2JZ in their 370Z like this guy did? 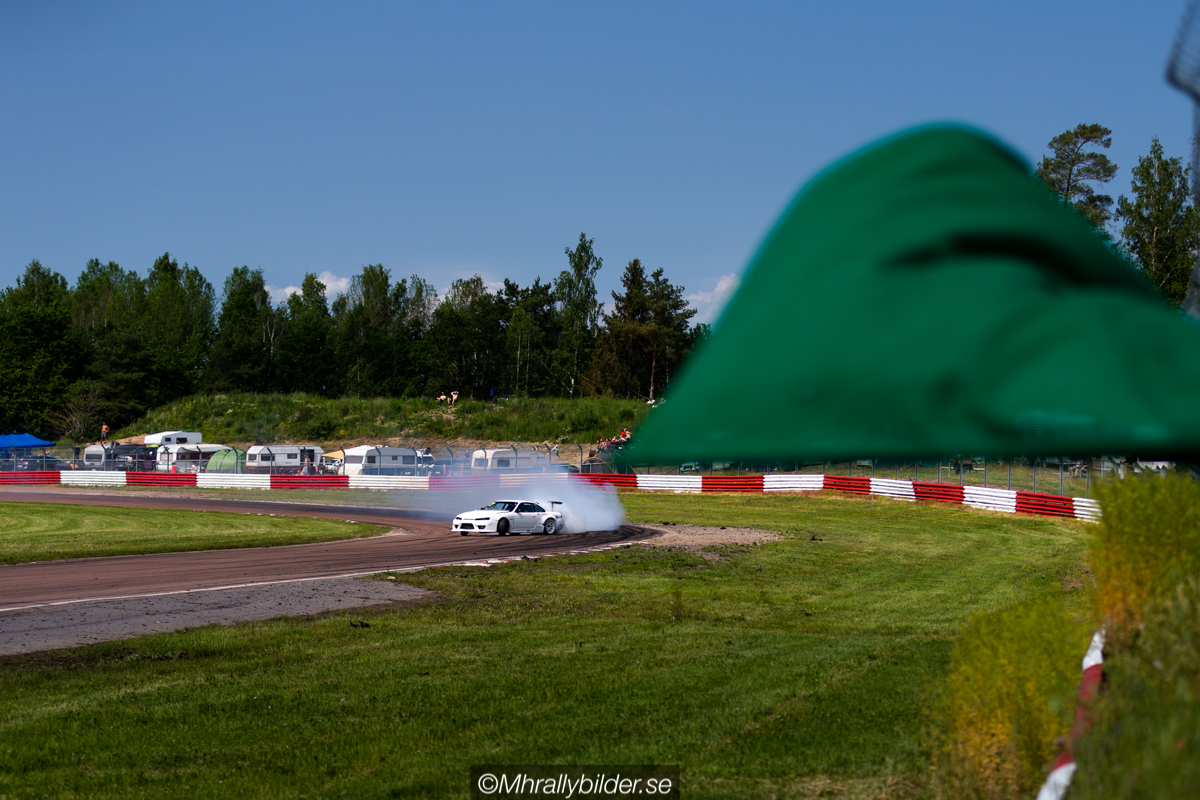 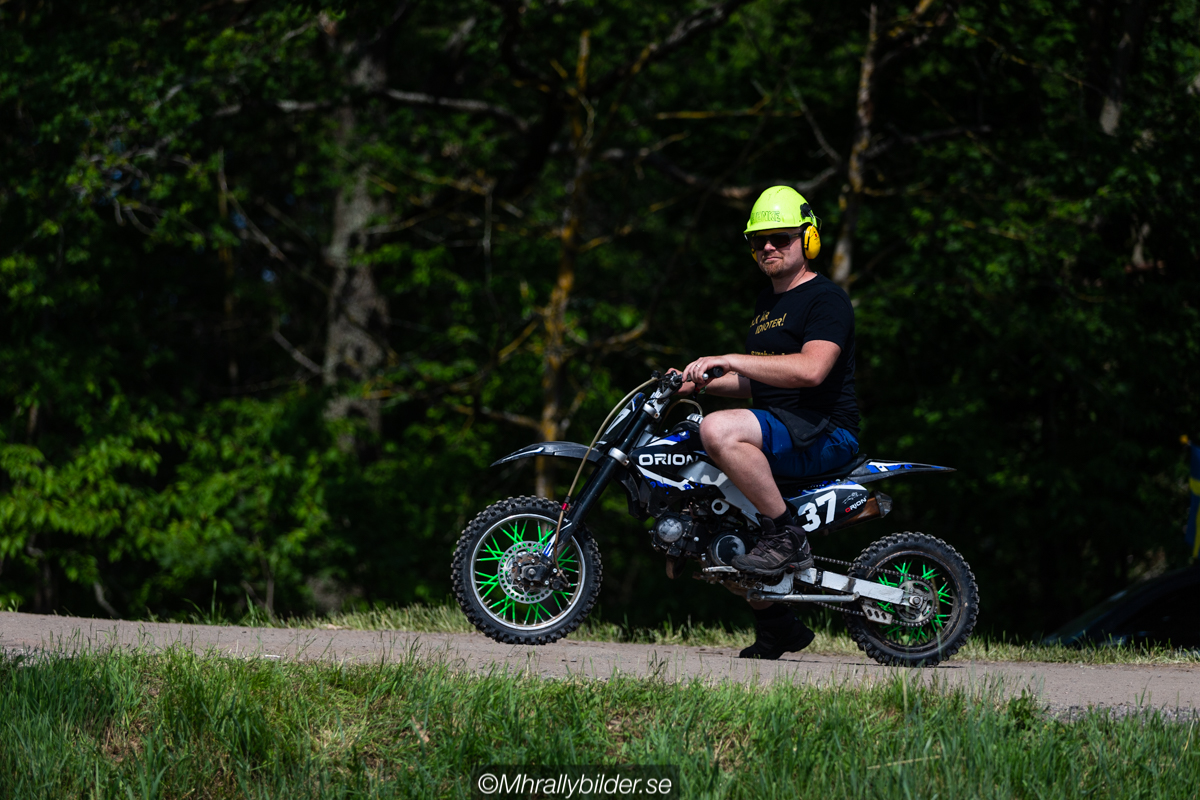 Work shoes, some sort of working shorts, a hardhat and ear protection, clearly dressed for Gatebil! 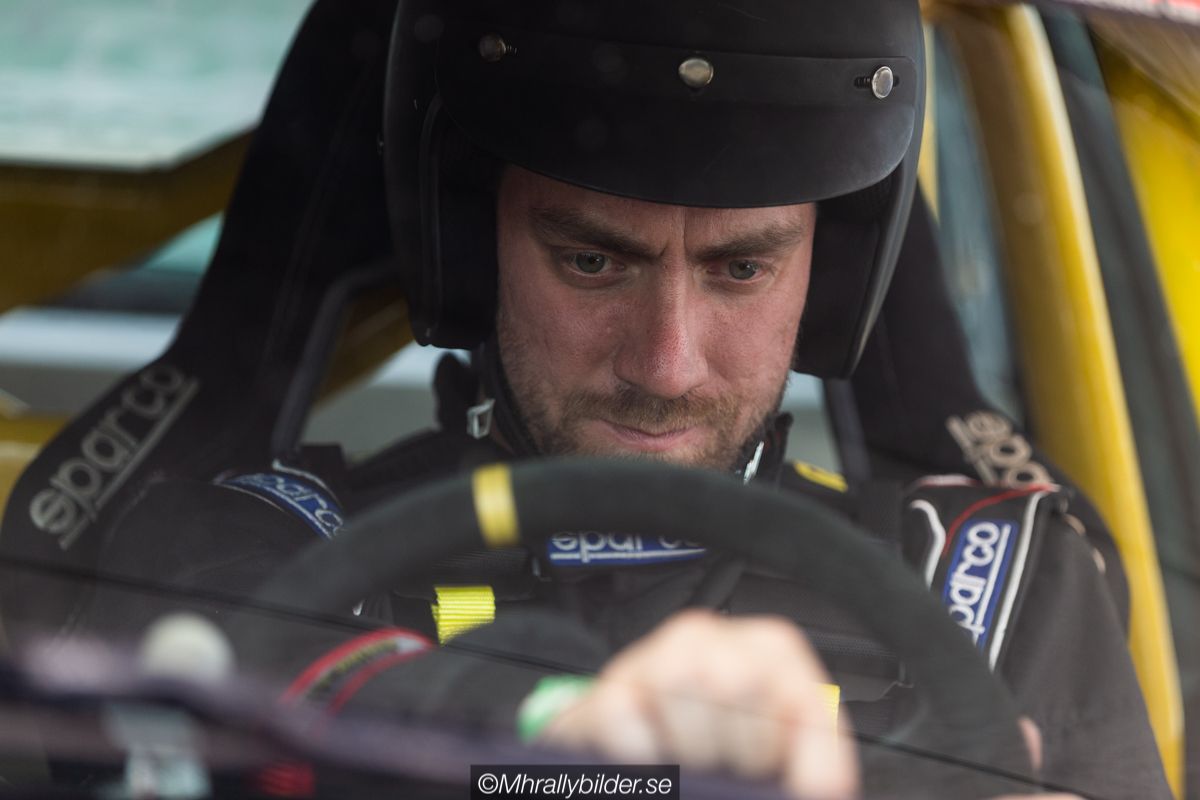 Keeping a look at the gauges is always important when you are about to hit the track! 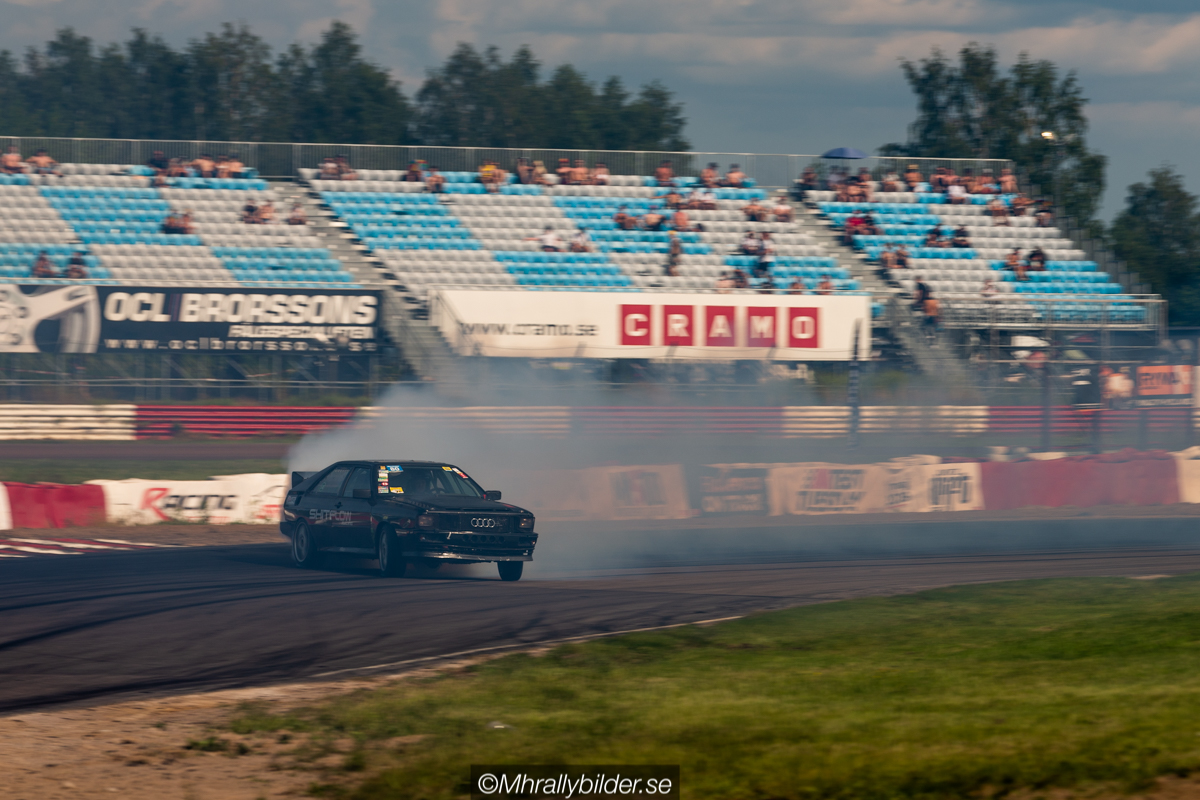 As I said earlier, if you talk with the driver before they will in most cases use even fewer braincells than they usually do, and that’s when you get the pictures that are just

that little bit better, and this time this guy really sent it! Because when he tried to enter the next corner backwards he ended up in the gravel trap (and I got covered in gravel and dust). 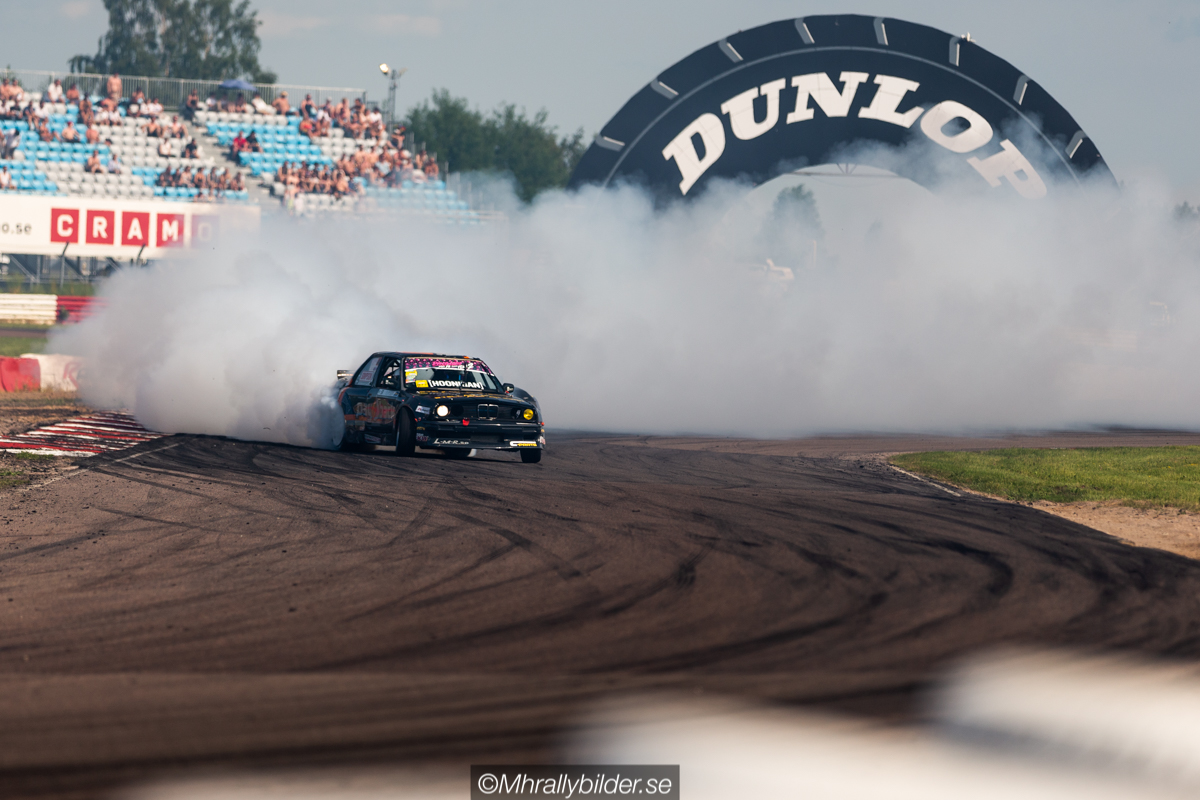 One person who doesn’t need to be told to floor it is Jim, he knows that when he has done his sighting lap he will prioritize the corners with photographers, just to make it

easier for him when he needs photos after the event! 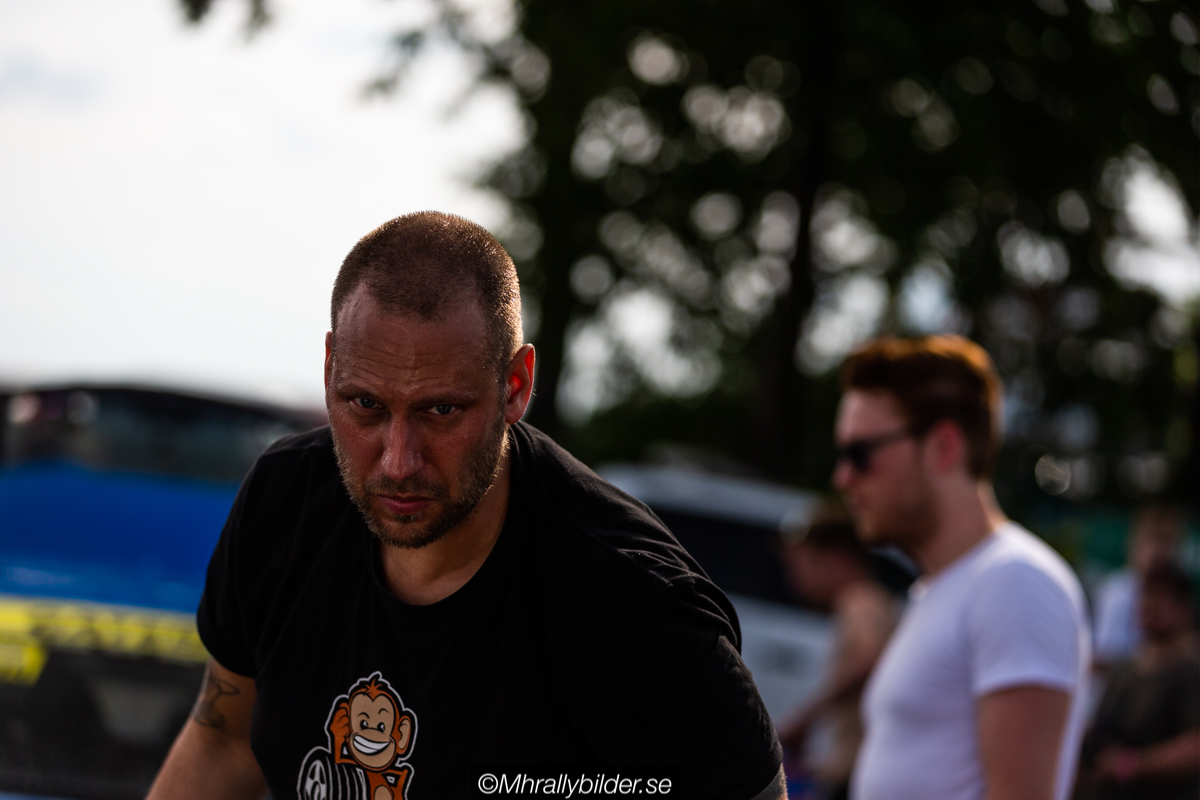 As I said earlier, it got close to 30°C during one of the days, and therefor I understand this guy when he had washed himself and his car in the car wash, and regarding

who needed it the most I advice you to ask him about it and not me! 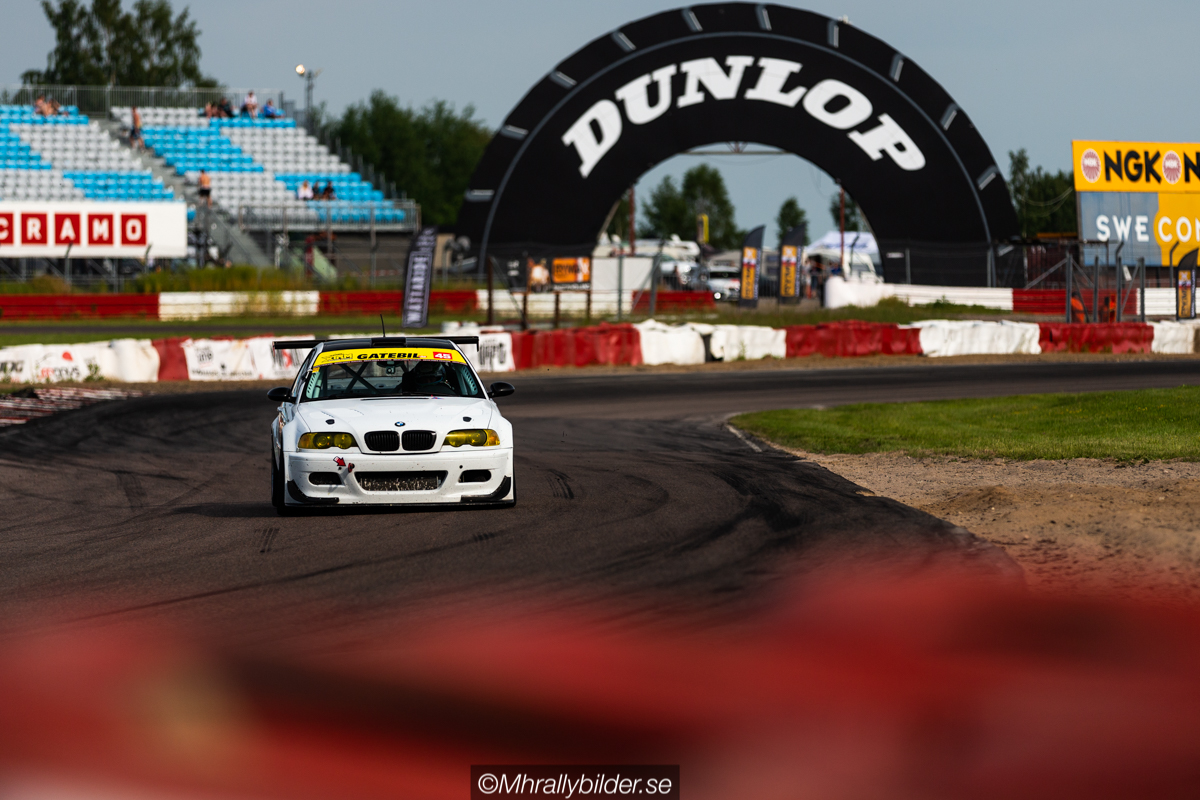 When I was out and about in the pits I got a message from a friend saying he was about to go out on track to get some laps in to try a setup, and with the tools he had he

was flying! At least until some of the electronics caught fire.. 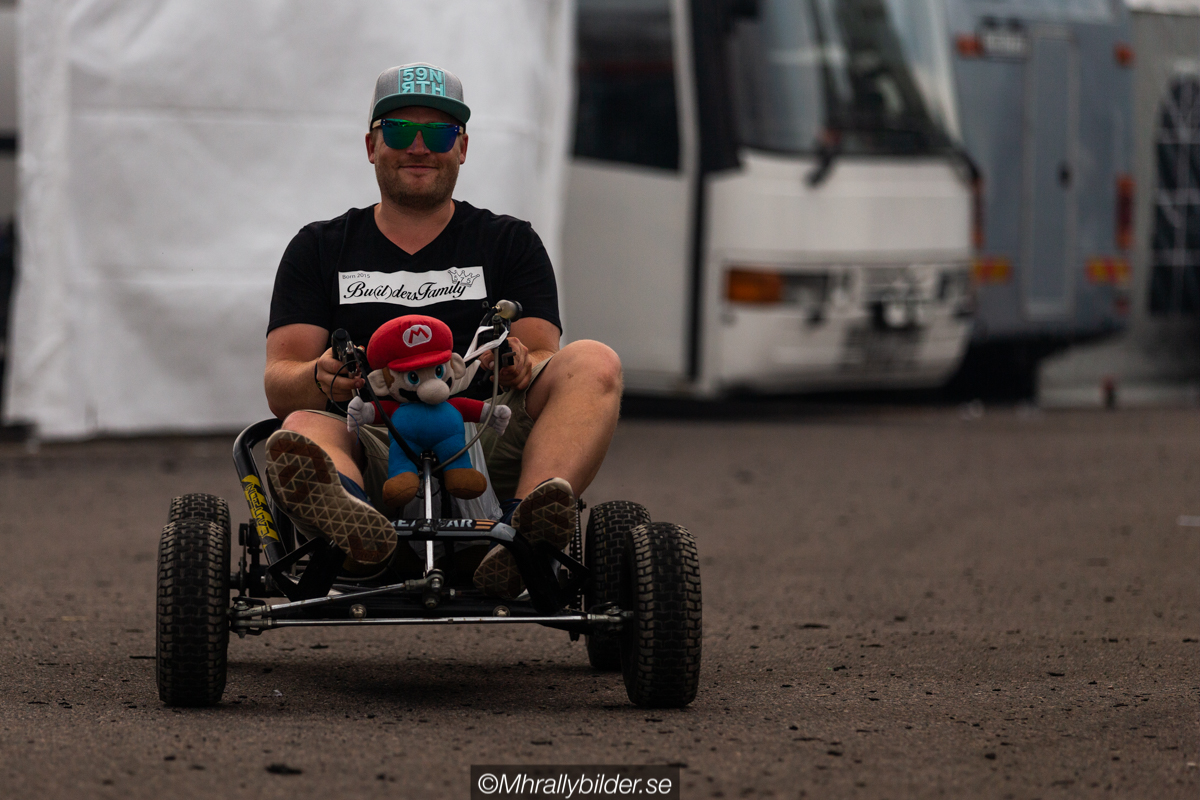 He has Mario strapped to the front of his homebuilt go-cart, I can’t figure out something better to use to get around the vast pits at Mantorp!

That was all I had to show from Gatebil Mantorp 2019! I hope you have enjoyed reading the article as much as I enjoyed creating the content in it!